The first Belgian trial involving self-driving trucks will take place from 31 March to 6 April 2016. The project is an initiative of Volvo Trucks Belgium and will comprise three convoys of two or three trucks each. This concept has become known as ‘platooning’, a term that originated in the US. Although platooning seems very promising in terms of efficiency and environmental friendliness, a number of obstacles must first be overcome before self-driving trucks can really make their debut on our roads. 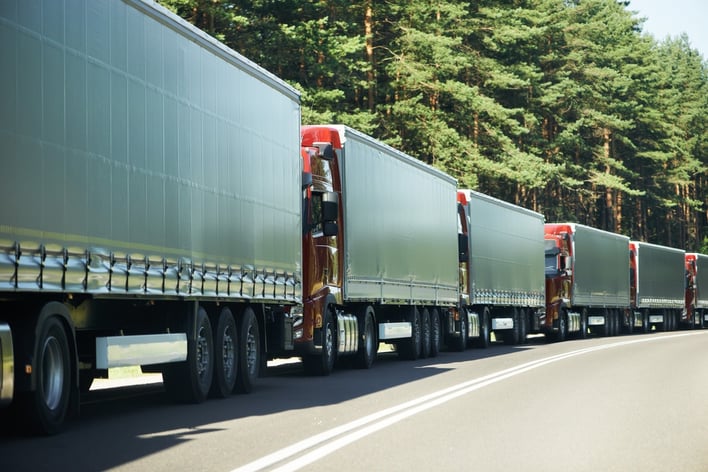 The concept of platooning implies that a group of automated trucks drive in convoy, a short distance apart. The convoy is guided by the first truck and automatically reacts to its actions. Thanks to the small distance between the trucks and their constant speed, the use of self-driving road trucks decreases fuel consumption, increases productivity and lowers carbon emissions. Read more about self-driving trucks and the potential benefits in our previous blog on road trains.

While the technology for platooning may be ready, the legal framework is not. The Dutch Minister of Infrastructure has already green-lighted new and more extensive testing for self-driving cars and trucks in the Netherlands. And even though the promotion of autonomous driving has been included in the Belgian coalition agreement, no concrete initiatives have been taken so far.

In early March however, under the Dutch presidency of the EU, the foundations were laid for the European Truck Platooning Challenge. This collaborative project involves manufacturers, EU Member States, logistics service providers, research institutes etc. and aims at strengthening European truck manufacturers’ technical leadership and global competitive position in this arena. Coordinating this initiative at a European level intents to avoid divergent legislations in each Member State. In early April, the relevant truck manufacturers from various different countries will follow a cross-border route for the first time, ending at the Port of Rotterdam.

The increasing openness to the idea of a harmonised legal framework gives cause for optimism. Road trains open up possibilities for more efficient logistics processes and can deliver significant savings for transport companies, whose margins have been under pressure for quite some time. As fuel costs easily account for 30% of a truck’s running costs, the cost benefits can rapidly add up. Although road transport is struggling with an image problem, it will remain an indispensable link in the freight transportation chain. If platooning can boost the efficiency and sustainability of this mode of transport, its image will also improve. It’s now down to governments to change up a gear too.