How smart are alternative routes?

The kilometre-based charging system in Belgium has been the topic of lively debate over the past few months. Before the introduction of the new tax on April 1, various figures were bandied around in terms of what the exact impact on transport costs would be. Some mentioned an average of 8%, others believed that the extra costs would vary between 2% and 12%. But the only way to calculate the true impact of the kilometre-based charging system is by simulating it on your actual transport lanes. In addition to the transparency these simulations offer you, you will also be much better prepared to discuss price increases with your subcontractors and your customers alike.

From moving fast to moving cheap

In general, transport optimization tools base their calculations on the fastest route from A to B. However, with the new tax in mind, you may consider alternative routes if they enable you to avoid extra kilometre charges. But how smart are these alternative routes in reality? That’s the kind of puzzle we at Conundra love to crack.

We immersed ourselves in the data and analysed a multitude of scenarios linking starting points and destinations. We broke down the cost into different components: the cost per hour, the cost per kilometre, a fixed cost per vehicle and the cost caused by the road tax. One thing we didn’t integrate in the simulation exercise was the impact of congestion and the fact that trucks are prohibited on some roads. 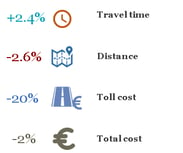 We found that if you accept an increase in driving time of just above 2%, it’s possible to calculate routes that are 2% shorter and lead to a kilometre-charge saving of up to 20%. This can also achieve a 2% drop in the overall transport cost, of which the kilometre tax forms only a minor percentage. But these are just averages. In some cases the total cost reduction was 10% or more, whereas in others the cost benefits were negligible.

Smart use of data

So should we all start directing our vehicles along alternative routes? Yes and no. No, because our analysis revealed that switching to alternative routes is cost efficient for only a small percentage of all transport journeys. Yes, because in a low-margin market every cost saving can make a difference. Therefore, making smart use of data may keep you that all-important one step ahead of your competitors.

What’s the lesson learned? That the first thing you need to do is to simulate the impact of the kilometre-based charging system in your situation. Building on that, you can integrate the kilometre tax in your route optimization tool. By doing so, you determine the extent to which you want the tool to take the road tax into account – perhaps you want to exclude time-critical shipments, for example. The road tax is now a fact of life that every transport company needs to deal with. But it may also be a driver for further transport optimization. Now isn’t that a refreshing thought?!

Dr. Ir. Steven De Schrijver is co-founder and CEO of Conundra. He has more than 17 years of practical experience in supply chain optimization and is an experienced board advisor at EU level. Steven also delivers academic publications, has a PhD and is a lecturer in operations research.