Can the transport sector benefit from Blockchain?

Blockchain is one of today’s hottest technological hypes. While the transport sector may well derive value from this technology, we nonetheless better think twice before we go jumping on the bandwagon. To gain a better insight into the technology’s potential, we outline below the most important success factors and the pitfalls.

A word of explanation

The most significant asset of blockchain is the guarantee of authenticity of data. It’s impossible for anyone to doctor any data as soon as it’s a part of the blockchain. A word of explanation for those who are not yet familiar with the technology: a blockchain may be described as an itemized ledger that records every operation in a particularly ingenious manner. Each time a transaction takes place, it is being encrypted as a new block. Before this new block can be added to the chain, it must first be validated by the others to prevent fraud. Each block is encrypted and the result is not only dependent on the information in this new block but is likewise being fixed by the preceding block. When adjustments are made to a block somewhere along the chain, this immediately results in a conflict with the following blocks.

The blockchain functions as a distributed ledger: every player has an exact copy of the ledger. Should some brainy guy nevertheless succeed in perfectly doctoring one block and all the successive blocks, he is faced with the need to do this not only once, but he must repeat the process with all other actors along the chain. Strength in numbers!

This safeguard makes it practically impossible to forge the blocks, which also represents the immediate strength of bitcoin. In fact, it is bitcoin that has given the underlying blockchain technology its name recognition. Bitcoin is to blockchain as email was to the internet. As illustrated with Bitcoin, an independent third party that organizes and keeps general control over everything, mostly for a price (a bank), is not needed, as everybody has ready access to the full traceable truth that cannot be falsified.

Guarantees of authenticity should not be confused with accuracy. When someone enters faulty data into the chain, that data remains faulty. More so, because of the way blockchain works, it can never be corrected. Authenticity is respected in this process, albeit not the accuracy of the data. Nonetheless, players that generate faulty input and are detected, can be traced immediately, as likewise the transactions in which they are involved. 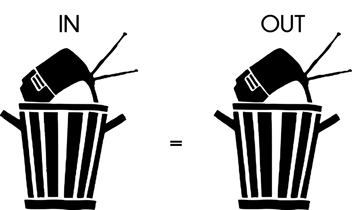 One example of this is the cultivation of coffee beans. The grower of the beans records that every package he ships out contains exclusively red beans (green beans are still unripe). The packages pass through several intermediate stages, each with its own registration, before it finally arrives with the consumer. A grower may well make a mistake and, accidentally and involuntarily, mix too many green beans in the packages. This can be noticed by a consumer and the provenance of the coffee shipment can be traced. To err is human, but the fraud is easily uncovered and penalized. Because automated data capturing is way less vulnerable for error, Blockchain is more readily employed in processes involving a lot of automatic data such as temperature measurements or location tracking, for instance, in the transport sector (see more examples below).

What Blockchain technology could mean for the transport sector

Blockchain’s main contribution to the transport sector will be for secure transactions all around the world. It’s possible to store bills of lading, letters of credit, payment guarantees, certificates, and the like in the blockchain. Combined with Smart Contracts, which are computer protocols that are carried out automatically within the blockchain, transactions can be completed without the intervention of a third party. The need for “trusting” the other party is completely removed. A Smart Contract will stipulate all necessary conditions for payment, such as on-time delivery and a certain level of quality, as well as block the funds for the agreed upon price. When the delivery meets all requirements, the monetary transaction is performed automatically.

Another example in which Blockchain can add value for the transport sector the automated registration of location, temperature and timestamps in refrigerated transport. In refrigerated transport, where loads must be blocked when a fixed temperature has been exceeded for a certain amount of time, this could be particularly helpful. The blockchain is an unbiased and unalterable ledger that displays the sequence and exact time for each event. All temperature registrations can be automatically logged to the blockchain. When violations occur, all we’ll have to do is check the blockchain to decide when it happened and who is liable. No more liability disputes!

When does blockchain make good sense?

Following the success of bitcoin in the financial world, other business sectors have started to take a closer look at Blockchain technology. The logistics sector has been one of these. Yet, it does not appear that the technology will take rapid flight in the sector. One of the reasons for this slow process is that the technology does not result in equal gains within every application.

Before we enthusiastically start our own blockchain network, we ought to ask ourselves some fundamental relevant questions. To find out whether Blockchain is something you need, you need to first ask yourself these questions:

- Do I need a shared database?

If you do not need to share your data with any other party along the chain, then a centralized database suffices. Also, a blockchain is only interesting when several users can contribute to the chain.

- Are all parties totally trustworthy?

If yes, then blockchain loses a great part of its added value. As it stands today, to set up a blockchain requires considerable effort, which renders other options a good deal cheaper, faster, more obvious and even self-evident.

- Is it important to eliminate intermediary parties?

The blockchain turns the presence of intermediary parties superfluous when conducting transactions. In effect, the transactions are dependent on each other rather than on an intermediary, who needs to be asked for his consent. If there is no need to eliminate intermediaries, the technology immediately takes on an altogether far less interesting aspect. An eventual ‘middle man’ shall therefore rather interpose himself within a blockchain in the role of service provider.

- Will I make the trouble to integrate the technology into our operations?

If you are a firm believer in the blockchain concept, you will also have to convince the other parties along the chain to come on board with you. Together with these parties, you will have to seriously consider how you are to organize and conduct the transactions. It is, indeed, a fact that only when every transaction is consistent with the rules will you be able to create a solid and reliable blockchain. Also, there exist divers blockchain models amongst which you will have to make your choice. It is important to keep in mind that the implementation of a blockchain will require a lot of thinking and doing.

Perspectives within the transport sector

Are your answers to the above questions “Yes!”? Then Blockchain is the technology you need. If you have already laid the groundwork for optimizing your transport operations, Blockchain can – under the above-mentioned conditions – be your next step in achieving even greater gains. If you have decided to take the plunge, we in any event advise you to start on a moderate scale, with a limited portion of the chain.

For instance, the Antwerp firm T-Mining develops blockchain-based applications specifically designed for container logistics. Furthermore, do not get too many parties involved at the same time, this to avoid that one year later you haven’t advanced one step. By limiting the scope upon starting, you will be able to achieve quick gains and learn a great deal with limited risks. Every next step and broadening of scope will build on these invaluable experiences.